From Kingdoms of Kahara Wiki
Jump to navigation Jump to search

At the most basic level, trade starts as a local affair, often with agricultural products from the countryside making it into a nearby city in addition to various crafts made within a city itself. From there goods will often travel by water or overland routes so long as it can be profitably sold.

Trade is at the heart of many activities in Kahara. From goods moving to places they're needed to rulers seeking to control significant trade routes it serves as the lifeblood of the continent.

Trade begins in cities, or more accuratie, the countryside around the cities. It is from the smaller settlements and villages that agricultural products are grown and initially stored. From there these goods make their way into cities for consumption or for traders to buy and move on their own.

These cities are also where various other things are made such as tools and various crafts.

In the cities goods which will fetch a better price elsewhere are commonly bought by traders to be transported. When possible a water route will be used, but overland routes can be used when those aren't available. For particularly small but high value goods a Teleportation Circle can be used.

When the goods arrive at their next destination, commonly they will be sold from one trader to another to continue on a journey where they're demanded and it's still profitable to transport them.

The choice of route matters. Land routes can be used with few other options available but water routes are preferred. This is because the cost of goods being transported by land often double every 50 miles or so. This makes it highly impractical to transport low value things along land for every long.

Sea routes are different. Not only are they faster but they're far more efficient. Goods can be transported over hundreds of miles before their costs go up too much to be worthwile to trade anymore.

Teleportation Circles can only be used for small amounts of goods, as they require significant magical components to use and do not stay open long enough for more than a few people at a time. This makes conventional means of transportation necessary for an overwhelming majority of goods.

Trade in Kahara can be dangerous, and there are a variety of threats which may befall a trader which often necessitate hiring caravan guards and other people to make sure the goods make the trip successfully.

In many areas of Kahara, the reach of a local ruler can't be everywhere at once, meaning raids and informal "toolbooths" designed to exort traders are common hazards. Traders with strong caravan guards may fight, however, most will come to an understanding with the bandits to pay the toll and move on. In addition, areas that are well known for banditry may be circumvented at greater risk to the caravan.

On the waterways there's the perptual threat of pirates boarding ships and taking what they want. This is a greater threat the higher the value of the goods being transported is. Once again, this depends largely on the strength of a local ruler's fleet.

Whether it be politics or a corrupt local ruler, an area may be closed off from a trader from those nominally in charge of an area. Often negotations will need to take place or a trader will need to travel lesser known routes the local authority is less likely to patrol, often with increased bandit or other craeture risks.

A variety of supernatural creatures, monsters, undead and other dangerous beings can threaten traders, further necessitating a strong caravan guard.

Corrupted areas are often unpassable to traders, only being able to be done with any degree of safety with a spellcaster highly skiled in Purification. This doesn't stop various creatures of the corrupted areas from attacking, it just makes them go from nigh invulnerable to most attacks to rather difficult. 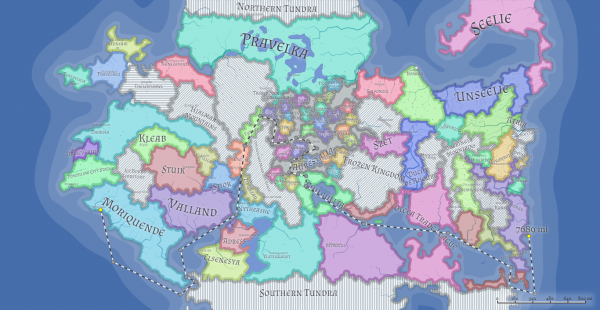 The Enchanted Path is a route of particular note, running all the way from Moriquende to Selesymemar. This trade route runs nearly 7000 miles and goes through the heart of Kahara as well as many of its waterways.

The route is called such as it's best known for highly valuable but larger enchanted items being transported from Moriquende to Selesymemar and highly valued tropically treated wood travelling the other way. Very few traders know the entire route, often each one takes goods along a leg of the journey and each trader makes a small profit on their own.

Of particular notes is the path through Aurestalia. The core and best known path travels through the Emperor's lands. Nobles within Aurestalia often attempt to bring the trade of this route through their own holdings to enrich themselves, and have been known to employ aggressive strategies to do so.

The core route has many branches and can go through a range of other places, it's simply that the core path is the best known.

Playing a Trader in Kahara can be a rewarding experience; Your character has an excuse to be just about anywhere in the name of making a potential profit, is more than able to travel and is in an excellent position to provide roleplay opportunities to other players. Playing a trader hiring caravan guards, hiring a scholar to figure out what strange item is being transported or even just dealing with common threats gives your character the ability to be a regular roleplay leader!